Ellsworth met his wife Wendy in Colorado in 1975, and married in 1980. Artwork with sharp edges transitioned to soft. He spent the last forty years with a fellow artist: Wendy is an internationally active art beader and philanthropic craft facilitator, especially active in Kenya, Africa.

By then, David’s work demonstrated diversification from wood bowls, pots, spheres, to his radical scorched and painted Solstice series.

David describes himself as a Maker + Educator + Communicator.

He’s renowned for thin-walled, narrow-mouth hollow wood vessels, spheres and sculptural forms. Early on, he developed specialized tools to perfect thin walls and tiny openings. These have quite a following.

From his Quakertown studio on a peaceful wooded property an hour north of Philadelphia, David teaches in the fall, winter and spring, Robust brand lathes of various lengths circle the first floor of the studio. The second floor serves as a gallery for David’s finished pieces with a large snooker table in the center. Around the United States, Ellsworth is a frequent speaker and panel member, and writes for American Woodturner Journal and other resources. His richly illustrated book, “Ellsworth on Woodturning,” was published in 2008. He also teaches abroad by invitation. David finds inspiration in new contacts and innovative work outside the wood arena. 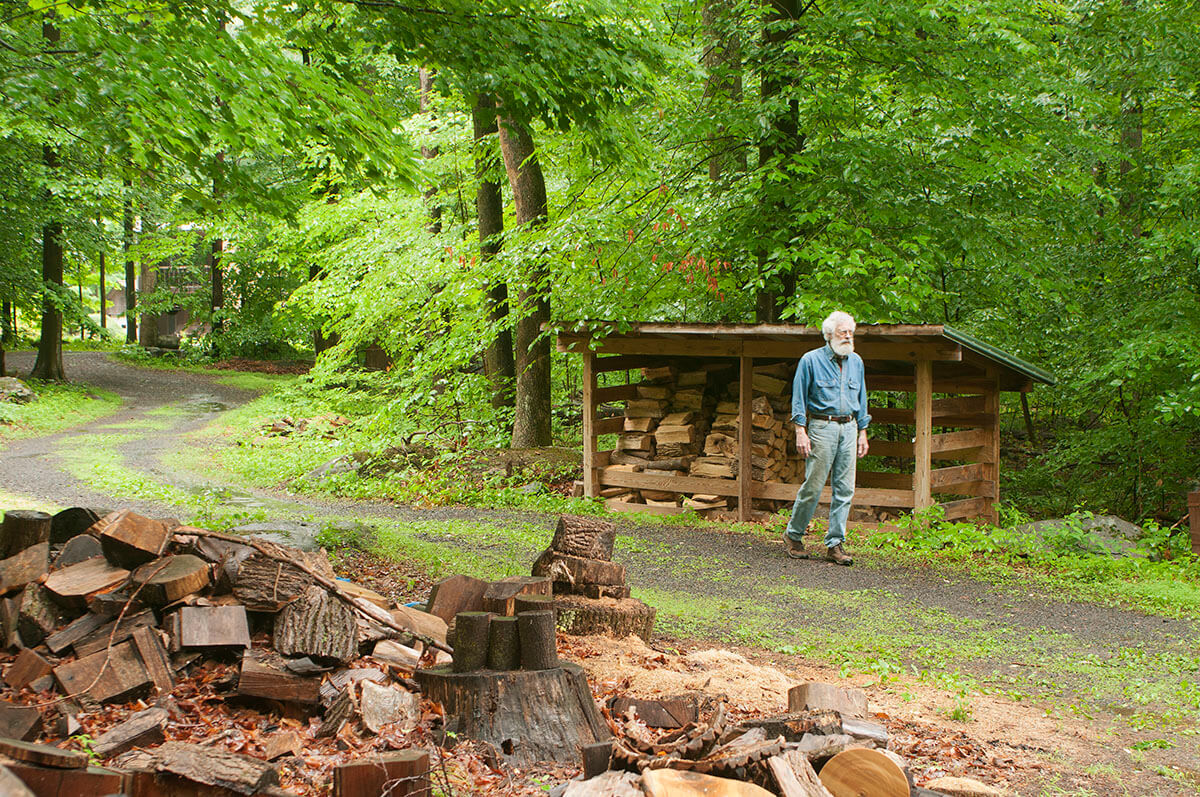 Paul Soldner, a ceramicist, hired him out of university to start a wood program. Soldner introduced David to the value of craft making, and convinced him that it is possible to address both – Fine Arts and Craft. Through the potters of the 1940s and 50s, David had come to understand that they truly enjoyed making things. Soldner helped him realize that one could make work, rather than teach in a university, to earn a living.

Having turned in high school, David began to turn again at Anderson Ranch. Production work, salt and peppers and sugar bowls, came first. Moving to a Boulder studio in 1975, bowls came next. Then the openings started closing up. Native American pottery, especially Hopi work with closed necks, continues to inspire his work. David briefly carved humming birds but has none in his possession. The practice and the pleasure of making guides David’s thoughts and works to this day. He still credits his Anderson Ranch experience as the most influential to his career.

In June 1978, LeCoff invited Ellsworth to be an instructor at a symposium organized by Albert, his brother Alan, and shop teacher Palmer Sharpless, at the George School in Bucks County, PA. David credits Albert and the symposia series as the nucleus for bringing wood turners together for the first time. The LeCoff symposia evolved into the nonprofit The Center for Art in Wood in Philadelphia

Work by Prestini provided visual crossovers to other crafts, especially potters. In 1978, David started participating in the new ACE craft show in Rhinebeck, NY. These emerging sales venues resulted in sales and networking for the makers.

In 1981 the Ellsworths moved from Colorado to the east coast where there was a practice of collecting multiple art works. In Colorado, buyers had been satisfied with buying one example of an artist’s work. Collections such as Bud Jacobson’s bowl collection helped spur the practice of collecting in depth, for the thrill of the hunt and fun of knowing the artist.

By 1982, many forms had evolved in David’s work, including thin walls, small openings, and eventually painted surfaces.

In 1985, he left the craft shows and transitioned to consigning work to better quality galleries. The work also grew bigger.

In 1986, Ellsworth helped lay the groundwork to form the American Association of Woodturners (AAW) at the October “Vision and Concept” conference at Arrowmont School of Arts and Crafts in Tennessee. He became the AAW’s first president and is the first member.

Networking exploded with the introduction of fax machines, the innovative new key to communication. David bought one for $1,200 and remembers communicating with Richard Raffin and others in Australia.

The recession of 1988 ground art sales to a halt. The colorful Solstice series resulted from time to explore new directions with the lathe, and time to experiment with sculptural shapes that included burned surfaces and color. Ellsworth observes that the dramatic results were too radical for the times, and returned to making vessels in 1991 with a fresh approach. He uses the sphere as the primary design element within his work.

In 1990, David began classes with four lathes, teaching one-on-one in his Pennsylvania studio. He now takes five students and is an authorized dealer for Robust lathes. Sharing with students is part of David’s legacy, and he might snooker you into a friendly game of pool.

Ellsworth spends summer through fall at his and Wendy’s home in the mountains of Colorado. He wonders who the collectors of the future will be. Who can start, now that prices have matured? This gives him something to ponder as he pursues both vessels and his new Emergence series, telescoping ringed towers of wood, accented with risk and color.