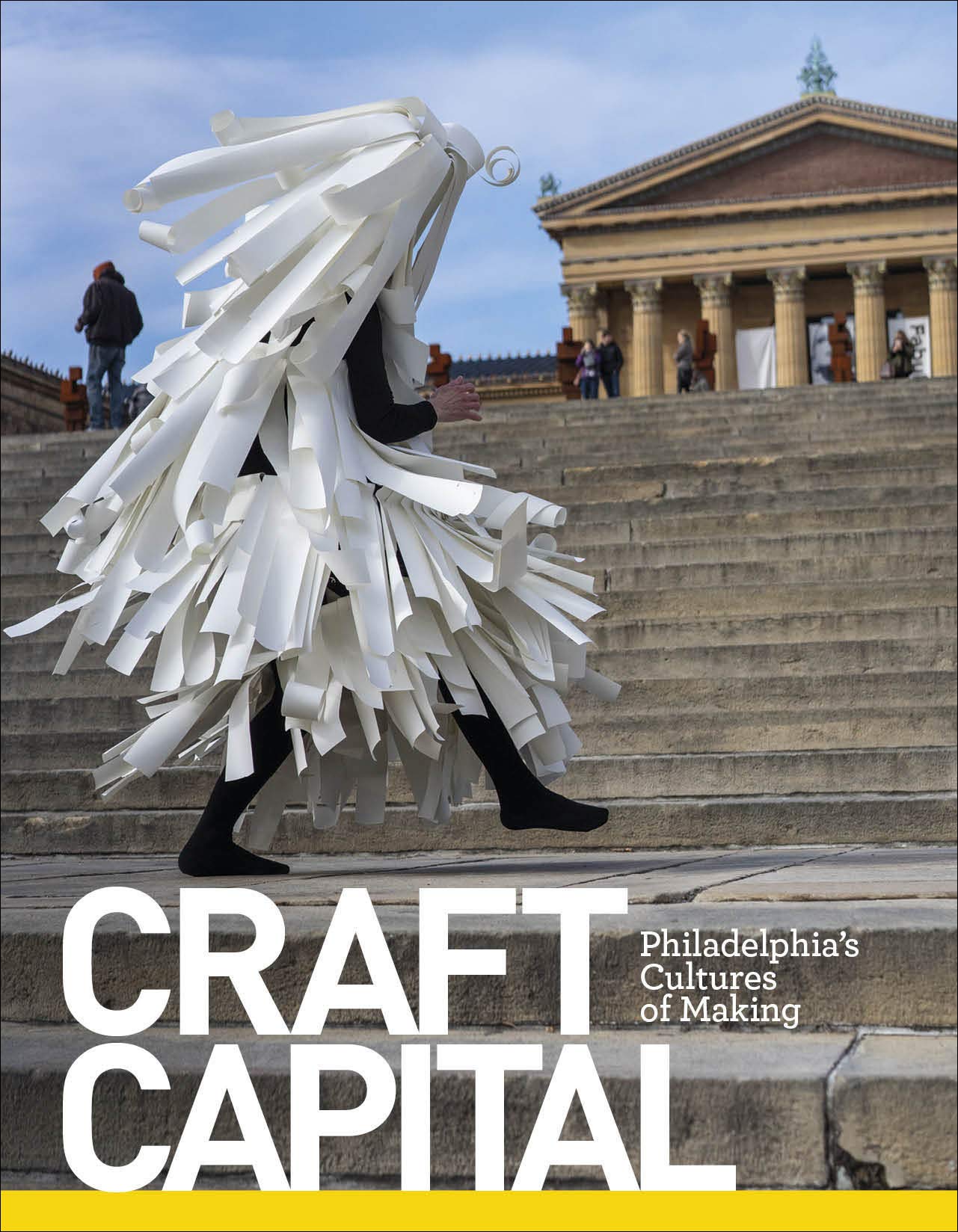 Edited by Glenn Adamson, order your copy with Headhouse Books in Philadelphia

Cover image by Jessica Kourkounis of performance by Martha McDonald

CraftNOW’s second publication, Craft Capital: Philadelphia’s Cultures of Making, commemorated the fifth anniversary of the organization in 2019. Through a series of visual and written contributions by curators, scholars and artists, the book explores the city’s enduring qualities — a concentration of skilled makers, and an evolving relationship to its own history, and more.

Philadelphia was the nation’s first capital following the ratification of the US Constitution. Having already witnessed the most dramatic of political events during the revolutionary era – in many ways, the birth of modern democracy – it would serve as the seat of leadership for only ten years, from 1790 to 1800. As a national capital for craft, however, it has remained hugely significant.

The title of the book is intended to signal not only Philadelphia’s prominent role in this creative arena, but also the concept of “cultural capital” – the way that a city’s makers serve as anchors for community and generators of many different kinds of value.

This book has been dedicated to Helen Drutt.

Pictured above is the process of making bells at Malmark.

Glenn Adamson (editor) is currently Senior Scholar at Yale University. A prolific author and curator in his own right, he has extensive experience as an editor, having co- founded the triannual Journal of Modern Craft (now in its 11th year of publication) and led on multi-authored volumes for the Milwaukee Art Museum, Victoria and Albert Museum, Museum of Arts and Design, and Yale Center for British Art.

Elisabeth Agro is The Nancy M. McNeil Curator of American Modern and Contemporary Crafts and Decorative Arts at the Philadelphia Museum of Art. She is co-founder and advisor of Critical Craft Forum.

Sarah Archer a contributing editor for the American Craft Council’s new journal, American Craft Inquiry, and a regular contributor to Hyperallergic. Her articles and reviews have appeared in The Journal of Modern Craft, Modern Magazine, Studio Potter, The Huffington Post, Slate, The New Yorker online, and The Washington Post.

Chad Curtis is an artist based in Philadelphia, and is an Associate Dean and Director of Graduate Programs at the Tyler School of Art, Temple University. He has exhibited internationally including: cont{r}act earth, Henan Museum, Zhengzhou City, China; The Tool at Hand, Milwaukee Art Museum; Exporting Pop: A Western Fantasy, Kuwait, United Arab Emirates.

Anthony Elms is Daniel and Brett Sundheim Chief Curator at the Institute of Contemporary Art (ICA) in Philadelphia. He has organized the exhibitions Cauleen Smith: Give It or Leave It (2018), Endless Shout (2016-7), Rodney McMillian: The Black Show (2016) among other exhibitions and projects. He was one of three curators of the 2014 Whitney Biennial.

Michelle Millar Fisher was The Louis C. Madeira IV Assistant Curator of European Decorative Arts and Design at the Philadelphia Museum of Art. Previously at the Museum of Modern Art, New York, she co-organized such exhibits as Design and Violence, and This Is for Everyone: Design Experiments for the Common Good.

Jennifer Naava Milliken is the Artistic Director for The Center for Art in Wood. Formerly, she served as an embedded staff member in international art museums, as an independent curator, and as the founder of a cross-disciplinary art space. Her writings examining the intersection of art, craft, and design have been in exhibition catalogues, anthologies, and publications.

Don Miller is a Philadelphia woodworker, educator, and formerly Associate Professor in Craft+ Material Studies at the University of the Arts. Miller’s work has been shown widely in national and international venues. He maintains a studio and workshop in Germantown, PA.

Kelli Morgan earned her doctorate in Afro-American Studies and Graduate Certificate in Public History – Museum Studies from the University of Massachusetts Amherst. Morgan has worked in a variety of curatorial, programming, teaching, and research positions. Currently, Dr. Morgan is Associate Curator of American Art at the Indianapolis Museum of Art at Newfields.

Jennifer Zwilling joined The Clay Studio in January 2015 from the Philadelphia Museum of Art where she was Assistant Curator for American Decorative Arts and Contemporary Craft. She taught History of Modern Craft at Tyler School of Art for ten years as well as American Art History at the Pennsylvania Academy of the Fine Arts. 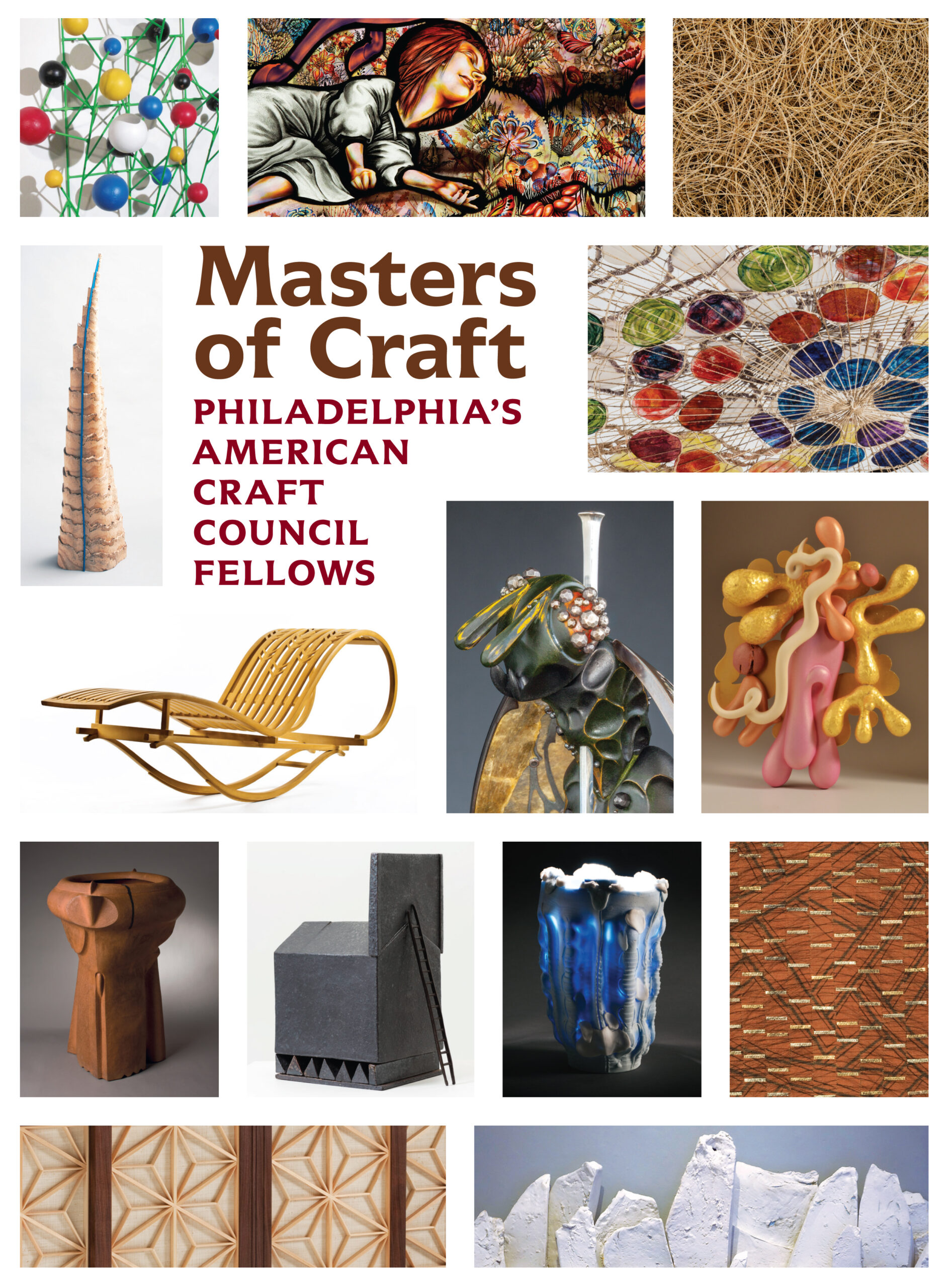 During CraftNOW’s inaugural year in 2015, the Philadelphia Museum of Art, Philadelphia Art Alliance, Center for Art in Wood and The Clay Studio honored 14 American Craft Council Fellows from Philadelphia who have had an enduring national impact through their works in wood, clay, fiber, metal, and glass.

Masters of Craft is documented, in its entirety, with a 160-page publication, including essays, artist profiles, and a full-color catalog of the included works. To purchase your hard copy today, email your request to info@centerforartinwood.org. You can also view the catalog free of charge online at the link below.