George Nakashima was born in Spokane, Washington, in 1905 to Japanese immigrant parents and attended the University of Washington in Forestry and Architecture, earning a scholarship to the Ecole des Beaux Arts in Fontainebleau and Harvard University in 1929. He received a Master’s degree in Architecture from MIT in 1930, returned to Paris shortly thereafter, and then to Tokyo in 1934, where he entered the employ of Frank Lloyd Wright’s protégé, the Czech architect Antonin Raymond. He was sent to Pondicherry, India, in 1936 to oversee the design and building of the first reinforced concrete building in that country, and became a disciple of Sri Aurobindo in the process. Because of the war, he left India in 1939, spent some time in Tokyo and met his future bride, Marion Okajima, who was also brought up in Seattle, Washington. They returned separately to the United States and were married in Los Angeles in 1941. After observing some Frank Lloyd Wright buildings under construction there, Nakashima decided to leave architecture and to create furniture so he could control the quality all the way from raw materials through design and construction. After George moved back to Seattle to start his furniture business, Father Leopold H. Tibesar allowed him to use the machinery at Maryknoll in exchange for teaching the boys woodworking.

In 1942, all Japanese-Americans on the West Coast were incarcerated because of Pearl Harbor and the war in the Pacific, and the entire Nakashima family was sent first to Puyallup and then Minidoka on the Idaho desert. Father Tibesar accompanied the Japanese-American community to “camp.”

Because of his design and building skills, George was given the task alongside the Japanese-trained carpenter Gentaro Hikogawa to improve the living conditions inside the barracks by utilizing available materials. During the process, he gained knowledge of techniques from Japanese carpentry, as well as the ability to adapt his design ideas to the materials at hand. 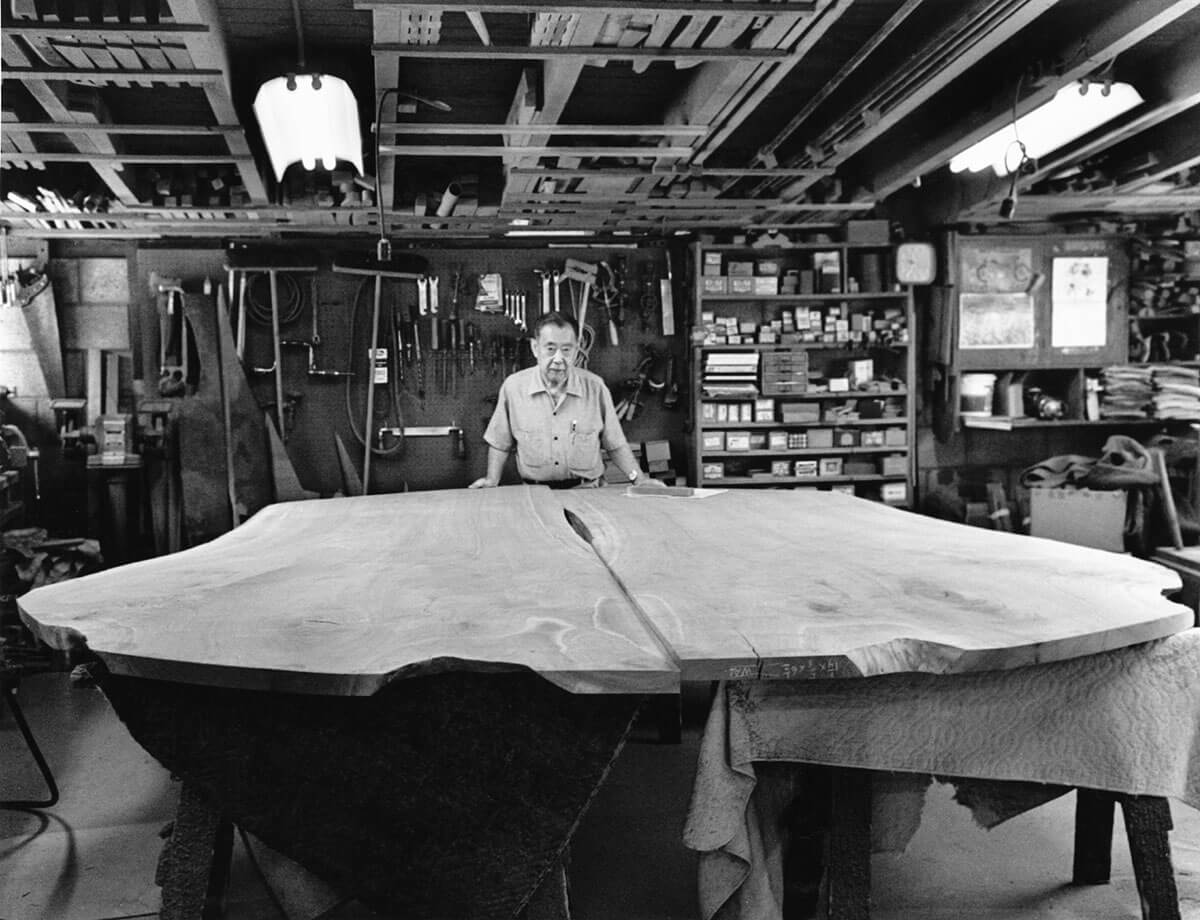 In 1943, at the request of one of his professors at MIT, his former employer Antonin Raymond, who had moved to New Hope, Pennsylvania, from Tokyo, sponsored the Nakashima family to live on his farm, where George was employed as a chicken farmer. After a year or so, the Nakashimas rented a small cottage, making furniture in the garage, and later bartered a small piece of property in exchange for labor on a neighboring farm. From a start in an old army tent, Nakashima designed and built a simple workshop and small house with his own hands, and continued to build and add property as his furniture business grew. In 1948, he joined Hans and Florence (“Shu”) Knoll and their design team, and created a small line of furniture for Knoll Studios while retaining the right to make the same designs at his workshop. In 1958, he designed an extensive line of furniture manufactured by Widdicomb-Mueller in Grand Rapids, but like the Knoll venture, it did not last more than a few years before Nakashima became dissatisfied with the quality control issues of mass-produced furniture.

George Nakashima designed a Catholic church in Karuizawa, Japan in 1934 and a disciples’ dormitory Golconde for the Sri Aurobindo Ashram in India in 1936. He continued his interest in sacred spaces by building the reinforced concrete hyperbolic paraboloid shell roof on the Church of Christ the King in Kyoto in 1965. He also built adobe chapels and monasteries for the Benedictine communities at Christ in the Desert, Abiquiu, New Mexico in 1972 and La Soledad in San Miguel de Allende, Mexico in 1975.

In 1964, George Nakashima met the sculptor Masayuki Nagare and joined the Minguren group in Shikoku, Japan, which led to the creation of ten one-man furniture shows in Tokyo and a lifelong relationship with Sakura Seisakusho, the only company in the world licensed to create Nakashima designs. In 1979, he received the Award and Title of Fellow from the American Crafts Council, and in 1983, published his only book, The Soul of a Tree in which he describes the philosophical underpinnings, as well as the tools and techniques of a woodworker.

In 1984, he purchased an immense walnut log, dreamed of making non-denominational “Altars for Peace” for each of the continents of the world, and created the first one for the Cathedral of St. John the Divine in 1986. Among the numerous honors he received are the Gold Craftsmanship Medal from the American Institute of Architects (1952) the Gold Medal and title of “Japanese American of the Biennium in the Field of Arts” from the Japanese American Citizens’ League in 1980, and the Third Order of the Sacred Treasure from the Government and Emperor of Japan in 1983. His first and last retrospective furniture show “Full Circle” closed in 1990, shortly before he received his award “Alumnus Summa Laude Dignatus” from the University of Washington in June; he died one week later.

He was survived by his wife Marion, who died in 2004, his son Kevin, and daughter Mira, who with his faithful craftsmen have continued his furniture business and philosophy of questioning egotism, materialism and mass-production of the modern world while honoring hand-craftsmanship and the inherent beauty of natural forms and materials. Two more “Altars for Peace” have been constructed and sent to Auroville, India in 1996 and to Moscow in 2001. During his lifetime, Nakashima designed and built fifteen unique structures on the Nakashima property, recognized on the National Register of Historic Places since 2008, a National Historic Landmark in 2014, with three of them on the 2014 World Monument Fund Watch List. The Nakashima Studio and Foundation for Peace hope to continue his legacy of peace, as well as architectural and furniture design, for future generations.