Known for his sleek minimal furniture and use of strip lamination, Michael Hurwitz was designated an American Craft Council Fellow in 2014. It all started in schools in the Boston area. After finishing at a high school that had an arts-heavy curriculum (at the time his father was the Arts Coordinator of the Newton Public Schools), Hurwitz, 60, attended Massachusetts College of Art.

Although his primary interest was in wood, there was no wood program at Mass Art so he enrolled as a metals/jewelry major. Throughout his high school years, he had taken silver-smithing classes on weekends at the DeCordova Museum in Lincoln Massachusetts, so this seemed like a natural progression.

During that first year of college Michael began hearing rumors of the Program in Artisanry (PIA), a new craft-focused school opening within Boston University. PIA would have not only a wood program, but a musical instrument making program. Michael knew right away that this would be the right school for him and he transferred there in 1975. During his first year at the PIA, Hurwitz divided his studio time equally between the instrument making and furniture programs.

By the end of the year, however, Michael realized that furniture design allowed much more creative leeway than instrument making, which required stricter adherence to historical precedents. He made a permanent switch to furniture making, but admits to hoping to build some guitars as a hobby someday.

Over the next decades, Hurwitz became part of a who’s who in studio furniture. Veteran maker Jere Osgood, who ran the wood program along with Alphonse Mattia, taught Hurwitz the process of strip lamination as part of the core curriculum at PIA. During that time Osgood also gave an assignment to “make a side chair that is 6 percent stronger than its breaking point.” This was an important lesson for Hurwitz, initiating what has become a lifelong investigation and directive. Two other chair assignments during these years proved influential: make an easy chair and a dining chair, suitable for production.

In the Senior Exhibition at PIA, Hurwitz’s prototype for the Tall Dining Chair caught the eye of Paul Smith from the American Craft Museum, who chose to include it in the exhibition New Handmade Furniture. The show travelled for two years and provided Hurwitz with commission work and other opportunities to exhibit. Among the commissions was one for six of his Tall Dining Chairs, arranged through the Richard Kagan Gallery of Philadelphia. 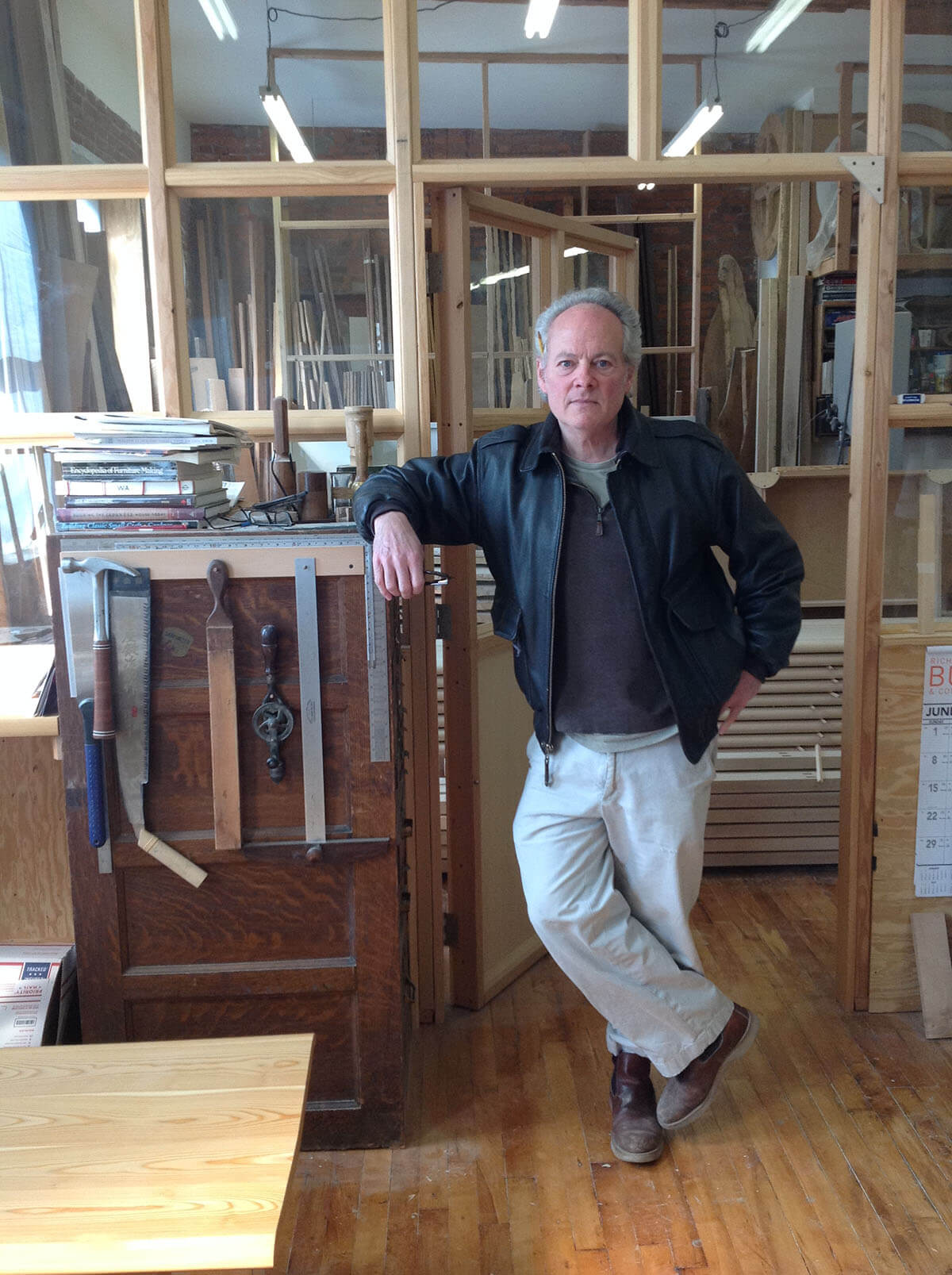 Hurwitz’s professional contacts grew when he set up shop at the well-established Cambridgeport Cooperative Woodshops (CCW). From June 1979 to August 1985, his workbench was alongside his friend Judy McKie’s, and periodically other grads from PIA joined as well, including Tom Loeser and Mitch Ryerson.

Hurwitz cites his six years at CCW as a wonderful, very productive period. “It was a way to go into business without knowing anything about it; the overhead was very low and I was surrounded by about fifteen friendly members willing to share their experience and knowledge. I wasn’t the only one working nights and weekends.”

Thirty years ago, Michael moved to Philadelphia to head the Wood Program at the Philadelphia College of Art (PCA) now the University of the Arts, a position he held from 1985-1989. He was hired by Dick Reinhardt along with the support of the other Craft Department faculty: Bill Daley, Warren Seelig, Sharon Church and Rod McCormick. Among the warm welcome of the craft community, the spirit of cooperation he sensed among its arts institutions, and the promise of affordable workspace, Hurwitz “loved Philly right away.”

A National Endowment for the Arts Fellowship in 1989 allowed him to study at Kyoto University in Japan, with Kenkichi Kuroda for six months. Kuroda-sensei was the son of living treasure Tatsuaki Kuroda, both of whom made lacquerware for tea ceremonies. It was during this residency that Michael decided not to return to teaching so he could spend more time in his studio.

The decision not to return to teaching in 1989-1990 allowed Michael time to devote to making and exhibiting his work, primarily through the Peter Joseph Gallery in New York, and Pritam and Eames Gallery in East Hampton N.Y.

In 1997, he returned to Japan for another six-month residency through The Japan Fellowship to collaborate with the urushi (lacquer picture) master, Yuji Kubo. This time he was accompanied by his wife, Japanese artist Mami Kato. With Mami acting as interpreter, Michael was able to complete several collaborations with three craftsmen from different disciplines. Pine Forest Desk was the major piece to result from that experience.

It is surprising that Michael is so humble, given the photographic history on his website and the buzz words in the titles of exhibitions that included him — New Handmade Furniture; Extraordinary Objects; Beyond the Tradition of the Rocking Chair; Masterworks; Fantasy Furniture; and nine solo exhibitions.

Hurwitz continues to live in Old City Philadelphia, but after twenty years he has just moved his studio to his newly renovated building in Fishtown, an artists’ community northeast of central Philadelphia. His beloved antique pickup truck with wood side panels greets visitors on the street, loaded with bags of sawdust to recycle. The two-story studio building houses seven studios, two of which are occupied by Michael and Mami. The rest are rented out to artists.

Philadelphia’s elevated subway roars outside the window of Michael’s bench room on the second floor. In this room, he designs and builds mock-ups and models, and stores other tools for communicating with clients.

The shop is organized and open with room to work. Small stacks of bench seats destined for the Glenstone Foundation — a collaborative project he’s doing with artist Martin Puryear — await the next steps in stickered piles. The walls display a few recently finished mirrors, and prototypes from the Marina Line stand nearby. Michael says that despite positive reaction, the Marina Line never went into production because he didn’t know how many he would make and/or how to price them.

The guiding principles evident in Michael’s work have to do with allowing the structure to help define the presence of each piece; there is a determined effort to do as much as possible with as little as possible. There has always been a search for an appropriate surface, to reinforce or complement, the structural logic of a given piece. This quest is apparent in his seminal milk-painted work of the early 1980s, through the urushi pieces completed in
Japan, to his recent Twelve Leaf Resin Table which holds light and color in the lens of resin that becomes the table’s surface. Regardless of the form a work takes, Michael’s appreciation of and fondness for the materials is always paramount.