The Center for Art in Wood: Vision into Art

The Center for Art in Wood

The Center for Art in Wood, in Philadelphia, PA, grew out of a series of wood turning symposia at the George School in Bucks County, PA, between 1976 and 1981. The LeCoff brothers, Albert and Alan, along with George School wood shop teacher Palmer Sharpless, organized the workshops. These symposia are now credited with spurring understanding and appreciation of wood turning as a contemporary art.

In 1981 as part of the tenth and final symposium held at Bucks County Community College, Albert organized the ground-breaking touring exhibition, The First North American Turned Object Show, and accompanying publication, A Gallery of Turned Objects. Immediately following, the work was displayed in joint exhibits at the Richard Kagan Gallery and Works Gallery in Philadelphia. Setting early precedents, the exhibit toured nationally to five venues.

Effective November 14, 1986, the LeCoff brothers incorporated the Wood Turning Center as a 501(c)(3). Albert became Executive Director, a post he still holds as the Center approaches its 30th anniversary in 2016.

Albert’s initial passion for wood turning became his life’s work. In 1988, he organized the first international exhibition of lathe-turned objects. Entitled the International Turned Objects Show (ITOS), the exhibition and concurrent color publication, Lathe-Turned Objects: An International Exhibition, would be one of the many Center exhibits to tour nationally. ITOS reached many general audiences who awoke for the first time to the art and beauty of objects made from chunks of wood. In appreciation, thirty-five international artists made LeCoff a stunning collection of walking canes, now known as the Albert LeCoff Tribute Cane Collection.

By 2001, the Center was collaborating with the Yale University Art Gallery to research, stage and document Wood Turning in North America Since 1930. This extensive survey of wood-turned art traveled from the Minneapolis Institute of Arts; to the Smithsonian American Art Museum, Renwick Gallery; to the Yale University Art Gallery. The accompanying color publication soon became a touchstone of documentation and 20th century craft context.

In 2003, the American Craft Council (ACC) recognized Albert LeCoff as an ACC Honorary Fellow for his undaunting dedication, passion and prolific service to the field of art made from wood. With staff, Albert has organized over 50 exhibitions, and published over 20 books focused on wood art. The Center stands as an invaluable resource for artists, educators, curators, students, collectors and the general public.

As Elisabeth R. Agro of Philadelphia Museum of Art states in Turning to Art in Wood: A Creative Journey (2011), “Wood turning was a latecomer to the field of contemporary craft. Much of the significance that surrounds the field of art in wood is in large part due to Albert LeCoff’s devotion to and promotion of this art form and his unwavering vision for the Center, and steadfast engagement with collectors and museums. By merging centuries-old wood turning tradition with the application of age-old and new techniques to traditional and uncommon materials; and establishing a network between artists, collectors, scholars and museums, the Center was the catalyst for catapulting the field into the art arena and onto the national stage.” 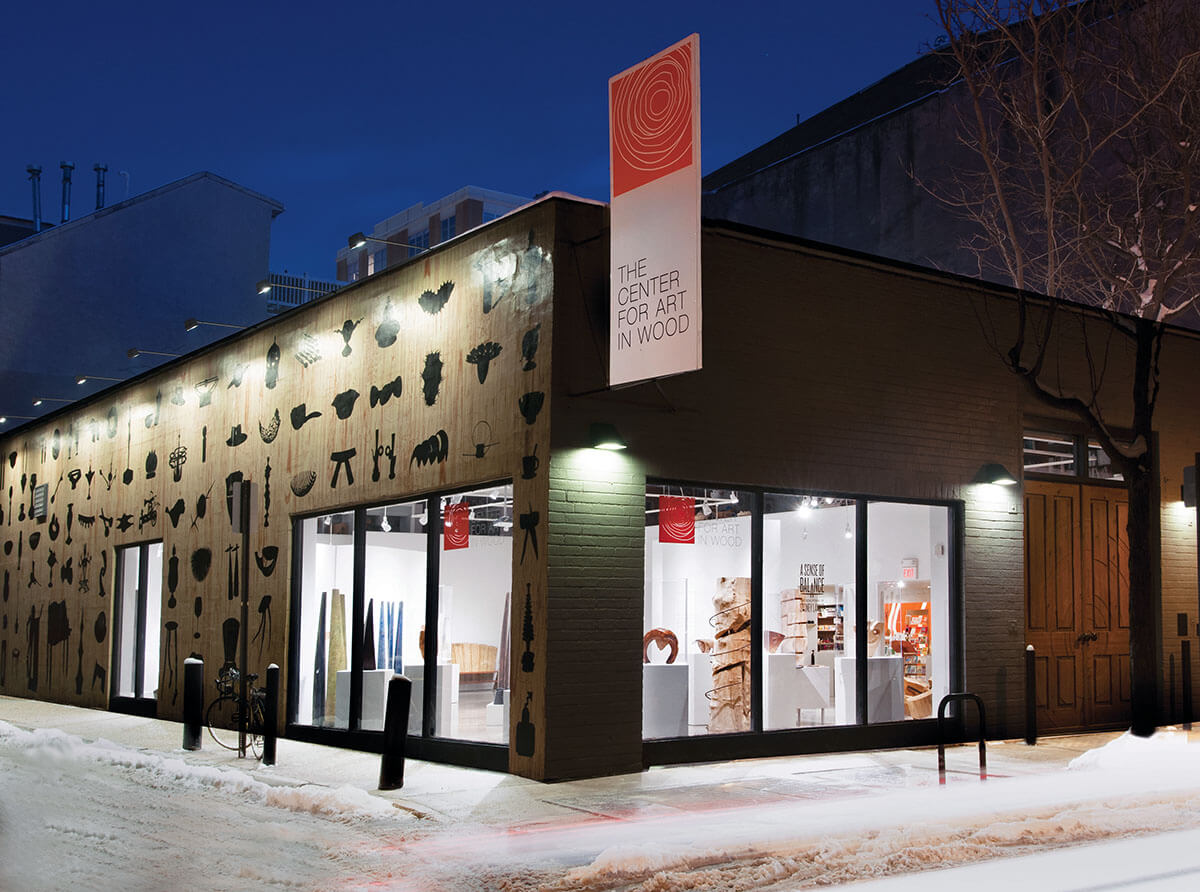 The Center for Art in Wood exterior. Written in Wood mural by Benjamin Volta (left); AT THE CENTER delivery doors designed by Gord Peteran (right)

MILESTONES FOR THE CENTER

The Center for Art in Wood will continue to be the preeminent arts and education organization advancing the growth, awareness, appreciation and promotion of artists and the creation and design of art in wood, and wood in combination with other materials.

In early 2015, to learn more about the Philadelphia-region ACC Fellows who work in wood, Albert and I paid several visits to the artists in their studios. Interviews included experiences, past and present that shaped the artists’ lives and careers, as well as examinations of innovative bodies of work that span thirty to forty year careers. Albert focused on selecting artwork for the installation at The Center for Art in Wood, while my essays capture these special visits. Clearly each fellow is an ambassador for the Philadelphia region, and the community of art and artists within which their careers thrive.

Glenn Adamson provides a good summary from the helicopter of the long-term impacts of the Center, writing in Turning to Art in Wood: A Creative Journey: “Craft in general derives its potency from the specificity of tools, materials, and processes, all worked out over many years and by many hands. The same is true of the Wood Turning Center [now The Center for Art in Wood]. You never quite know what you’ll get from this little dynamo of an organization. It may never be a large and powerful organization, but it will always be an interesting one; and that’s what really counts.” 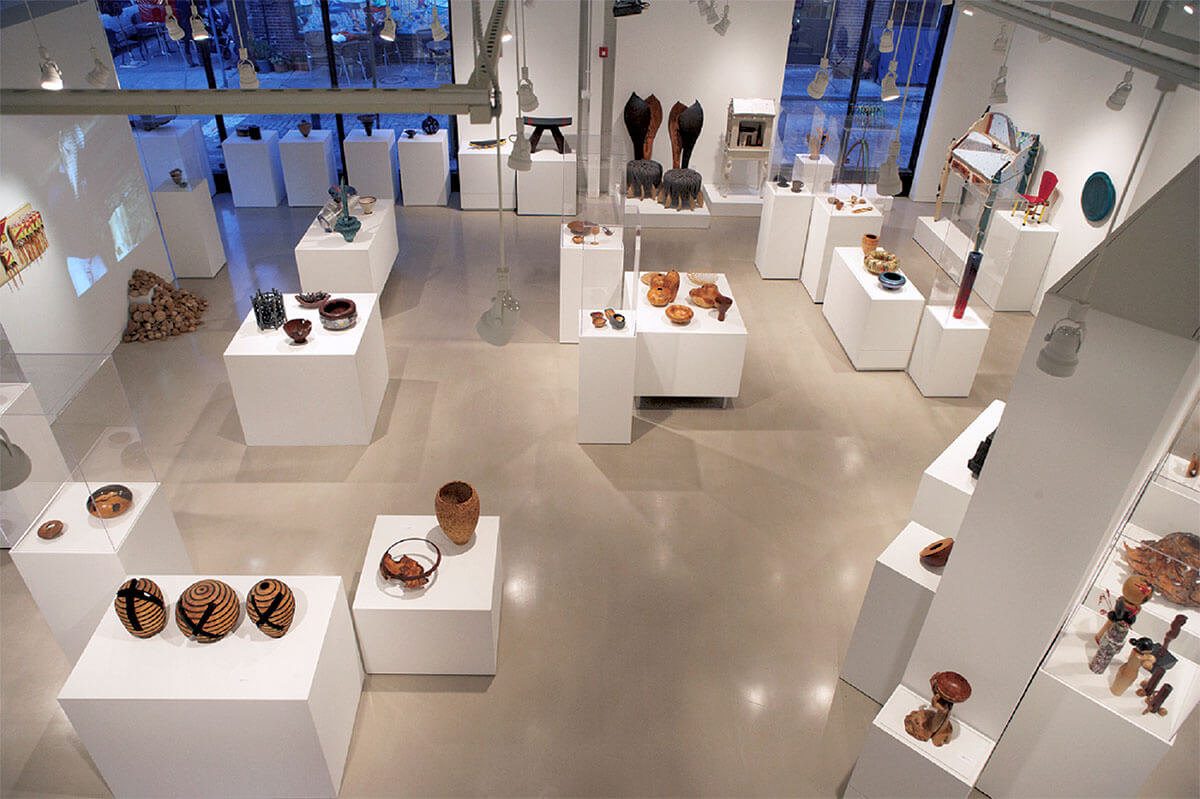 Installation: Turning to Art in Wood A Creative Journey, in the Gerry Lenfest Gallery.