The Clay Studio was formed in the mid-1970s when the city of Philadelphia was experiencing a renaissance of craft production as a result of newly formed craft-specific galleries and the robust academic programs at area schools such as Tyler School of Art, Philadelphia College of Art (now University of the Arts), Moore College of Art, and the Philadelphia College of Textiles & Science (now Philadelphia University). These programs formed a fertile ground to nurture a strong craft art community of teaching artists, students and graduates who made Philadelphia their home. In the 1960s craft specific galleries such as Helen Drutt Gallery, Snyderman Works Gallery and the Richard Kagan Gallery were established and contributed to the growing Contemporary Craft Movement in Philadelphia.

Founded in 1974 as a collective of five artists, including a teacher and former students from Moore College of Art, who were in search of a shared workspace, The Clay Studio was envisioned as a stepping-stone for students transitioning out of art school, offering affordable studio space and shared equipment. Within a short time, however, Clay Studio artists consciously shifted the Studio’s mission from an inward focus to an outward educational and community focus. It was the artists’ intention to affirm the importance of the ceramic arts alongside other art forms, as well as to bring clay as an accessible, tactile medium to a broad range of people. From early on ceramic classes and small-scale exhibitions were part of the collective’s fabric. In 1979, service to a broader community became an important focus and the Studio became a non-profit 501(c)(3) educational institution. The vision that was formed at that time is still at the core of our mission more than forty years later.

As the Studio grew members of the organization began to design programs to build a wide-ranging ceramic art community. In 1980 a devastating fire destroyed the facilities and TCS nearly folded. Yet with the tenacity of the newly formed board, the dedication of the artists, and some visionary donors, TCS rose from the ashes as an even stronger institution. In the years following the fire a professional director was hired, a long-term home was found at 139 N. Second Street and more staff was added. The Clay Studio served as an anchor to and a vital part of the blossoming arts community in the Old City neighborhood of Philadelphia and was one of the founding members of the First Friday coordinated openings that are now a staple of the citywide Philadelphia arts community.

Viewed from a local perspective, The Clay Studio provides studio space, educational programs and exhibition access to a broad array of artists and residents. It has taken a leadership role in the revitalization of the area through the development of its own multi-use arts building and the promotion of the Old City gallery district. The Clay Studio’s dedication to the region is further evidenced by its program collaboration with area cultural institutions, artists, schools, and community centers. The Claymobile program has become a local and national model for art educational outreach, bringing ceramic arts programming to schools where funding for dedicated art education is not available. TCS offers 250 classes every year, serving over 4000 students to adults and children in our on-site classrooms as well.

Through exhibitions, long-term residencies, guest residencies, and lectures, TCS has established itself as one of the most important centers for the promotion of ceramic arts in the world. Our prestigious artist residency program supports twelve young artists for up to five years with subsidized studio space, teaching opportunities and professional development support. Since 1992, the Studio has hosted Guest Artists in Residence from over 30 countries through its Guest Artist-in-Residence program, exposing the community to a wide range of cultures. Several major international exhibitions have added to the cultural exchange fostered at TCS, including Contemporary East European Ceramics (1992), Ceramics Israel (1995), British Studio Ceramics (2001), From the North: Canadian Ceramics (2006) and Five by Eight: New Art from Japan (2011). In 2001 the Studio became an institutional member of the prestigious International Academy of Ceramics. 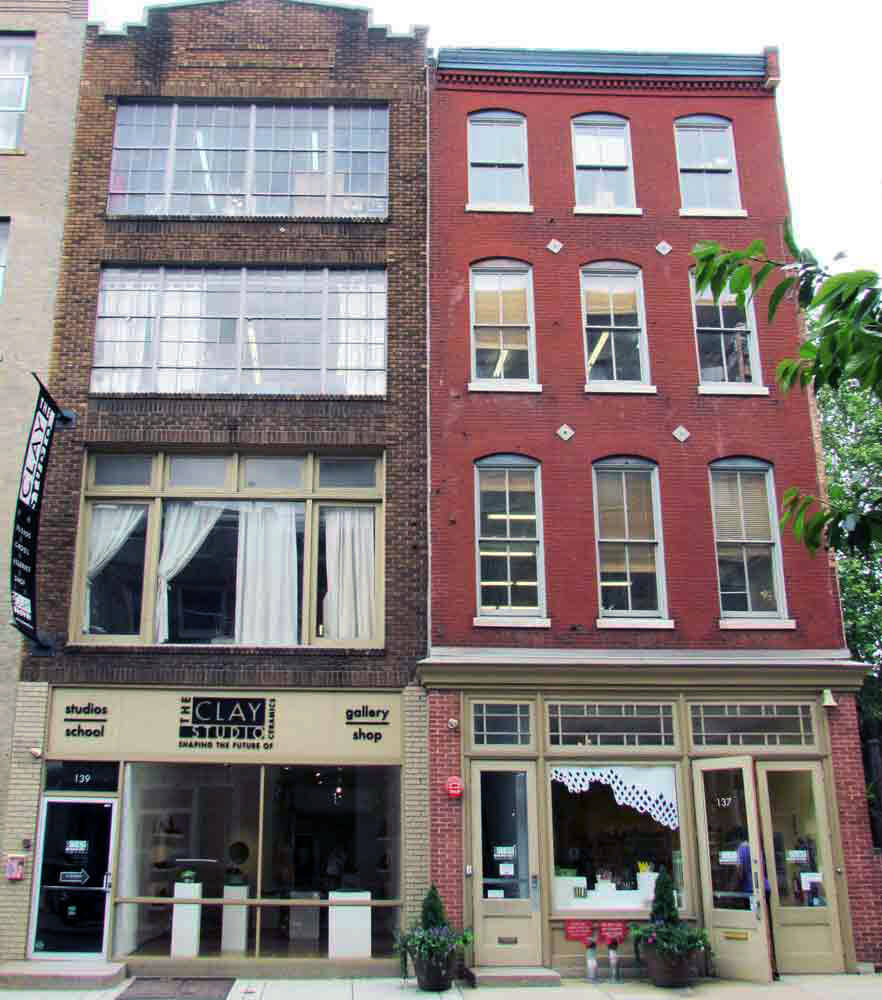 The Clay Studio’s determination to promote and develop the ceramic arts has fueled its astonishing growth and even higher aspirations for the future. Its diverse programs, and the variety of communities it serves, distinguish the organization as both a community oriented art center and as a national and international focal point for ceramic arts. In 2014 the American Craft Council rewarded this dedication and effectiveness by awarding The Clay Studio its Award of Distinction.